Pathfinding: the story of the Ullswater Way

There are many old paths in the Lake District. Some have been trodden since medieval times. Others are more ancient: forged by Saxon shepherds, or Roman road-builders, or prehistoric Britons seeking routes over the mountains from the sea. The Ullswater Way is, by comparison, a whippersnapper. Running for 22 miles around Ullswater’s shoreline, it has only existed since 2016. But in just six years, it’s become one of the National Park’s most popular lakeside trails, with some fascinating artworks and heritage to discover along the way.

“When I was a boy, walking round the lake wasn’t easy, if it was even possible,” explains Miles MacInnes, a lifelong resident of the Ullswater valley, and one of the team who helped establish the route back in 2016. “There had always been paths, but you needed a good map and a bit of local knowledge to string them together. The idea of a long distance trail had been mooted for years, but never quite happened. Then the storm came.” 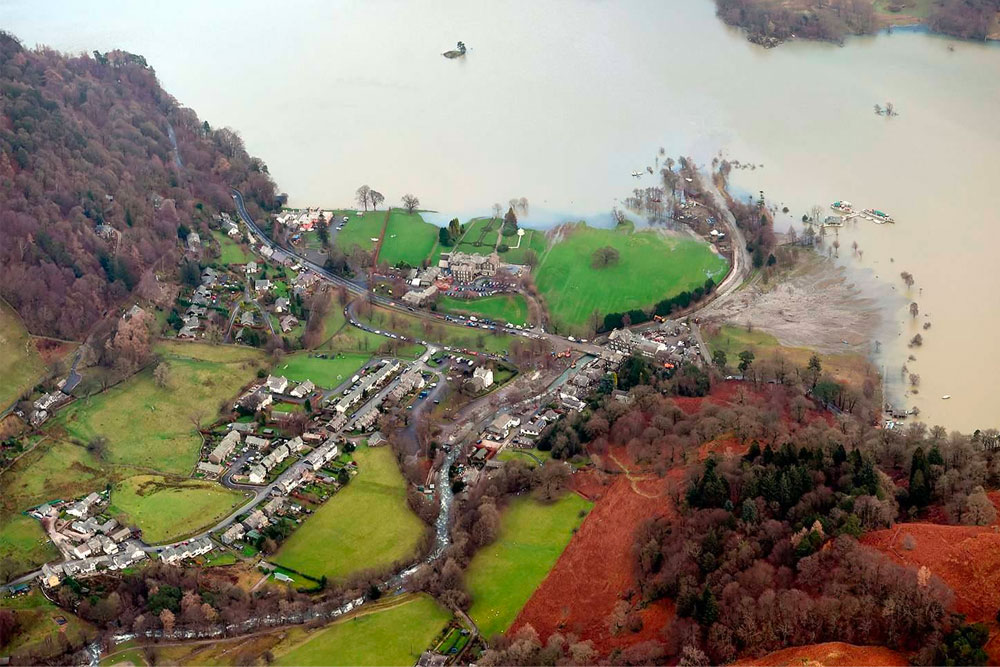 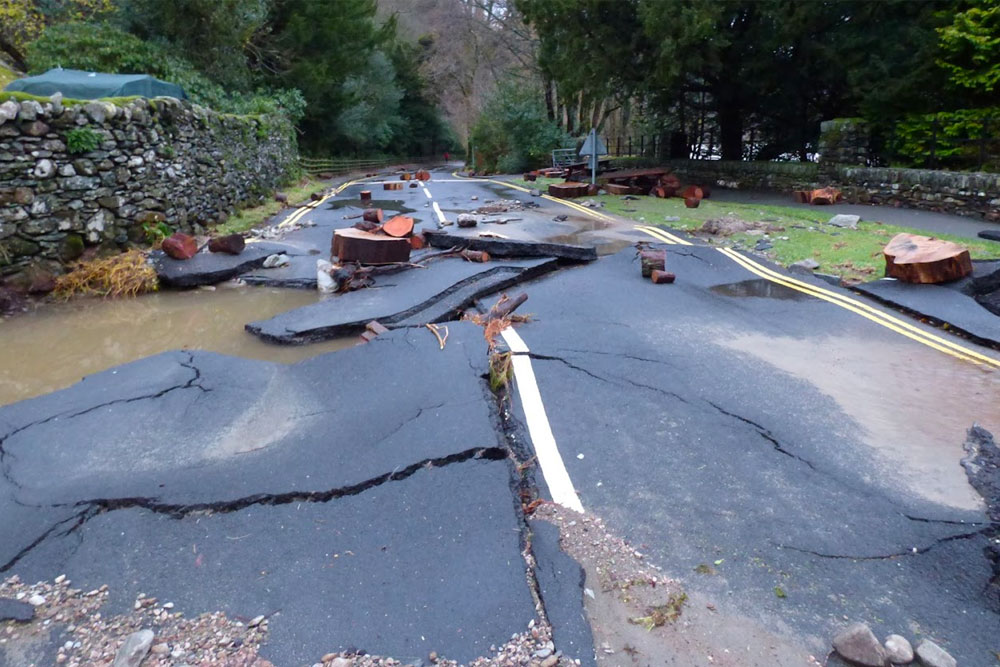 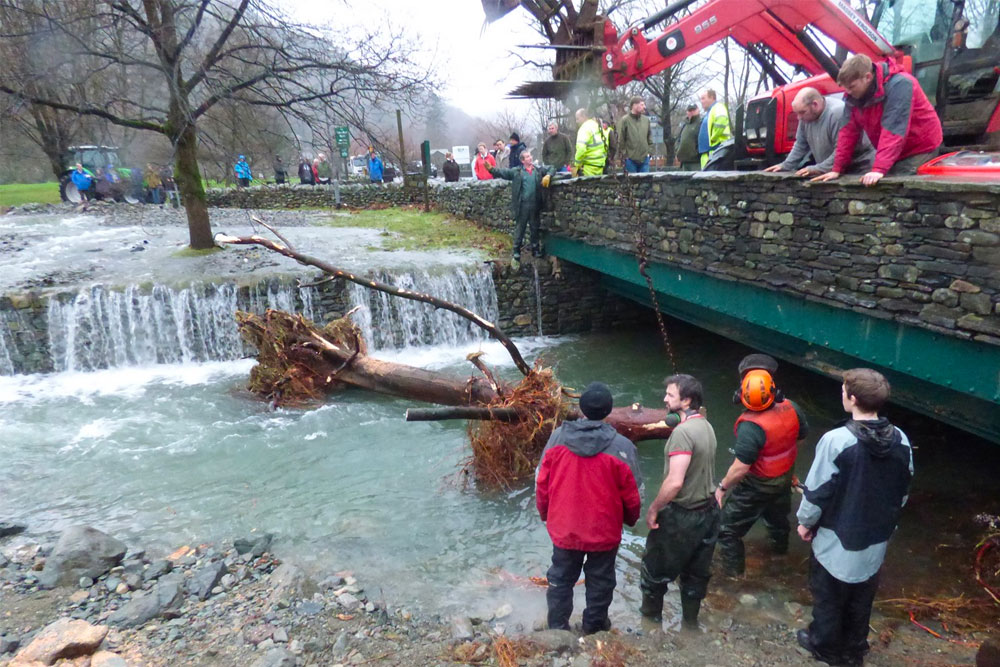 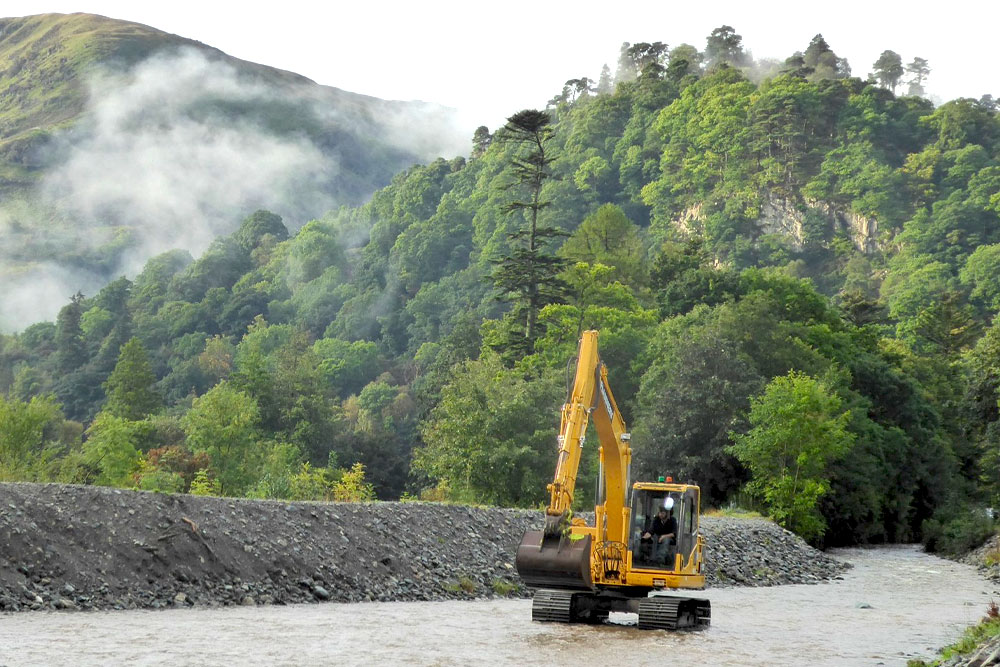 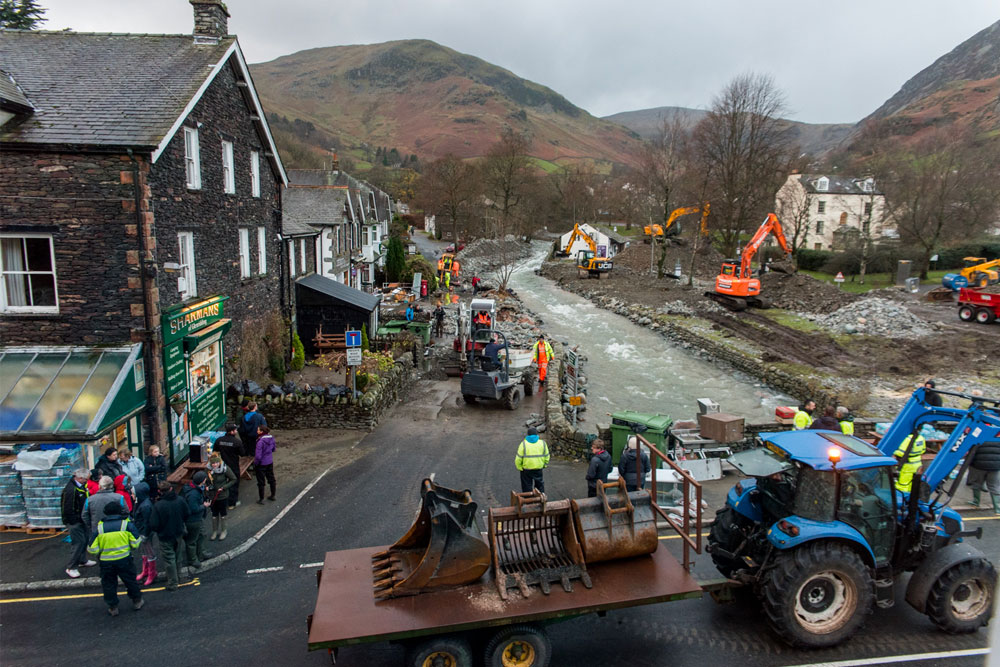 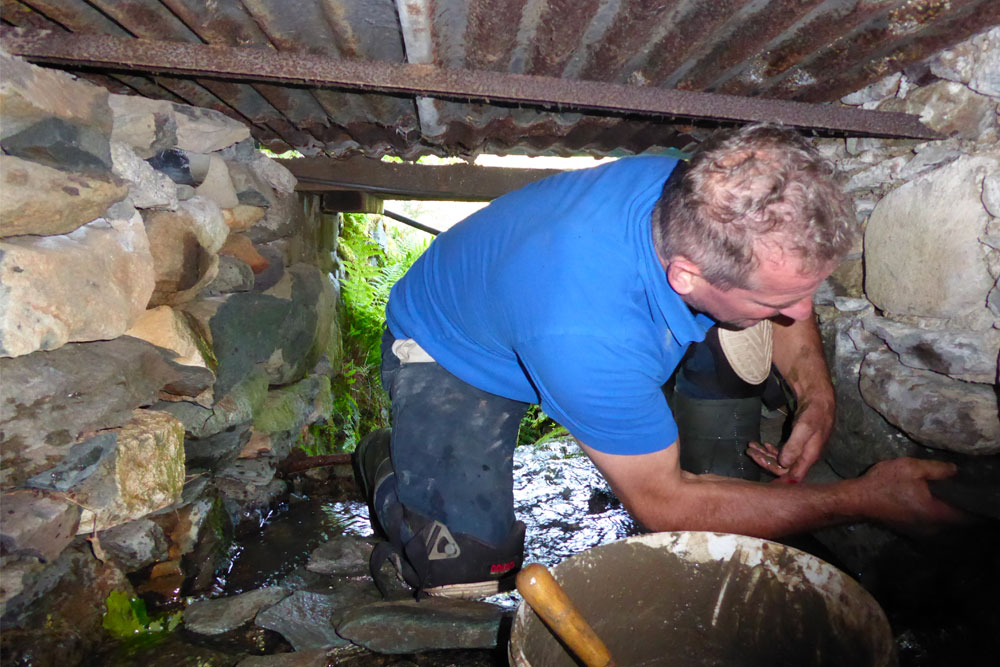 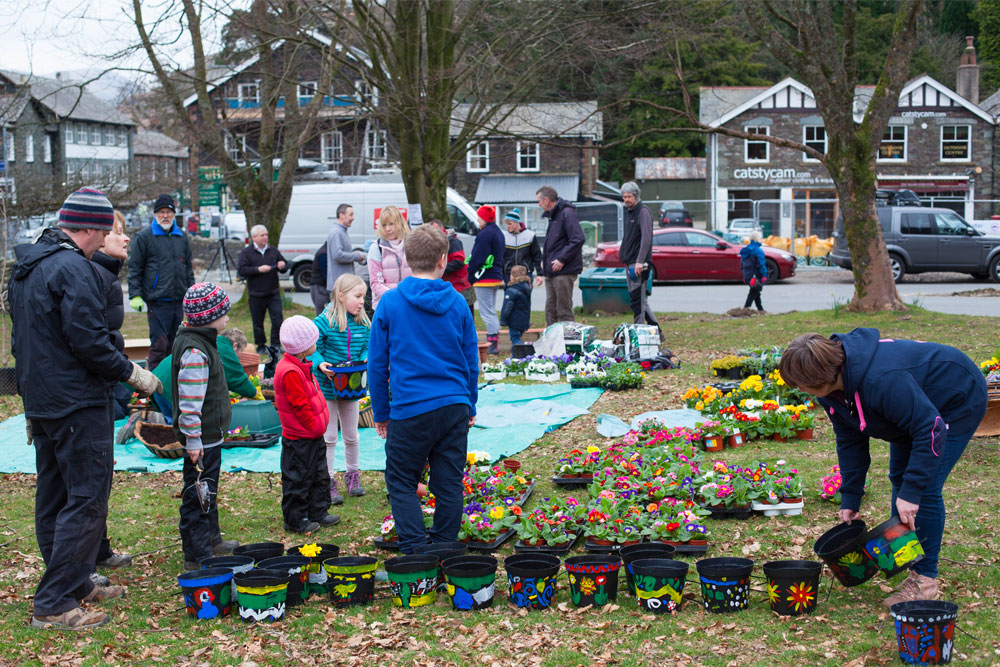 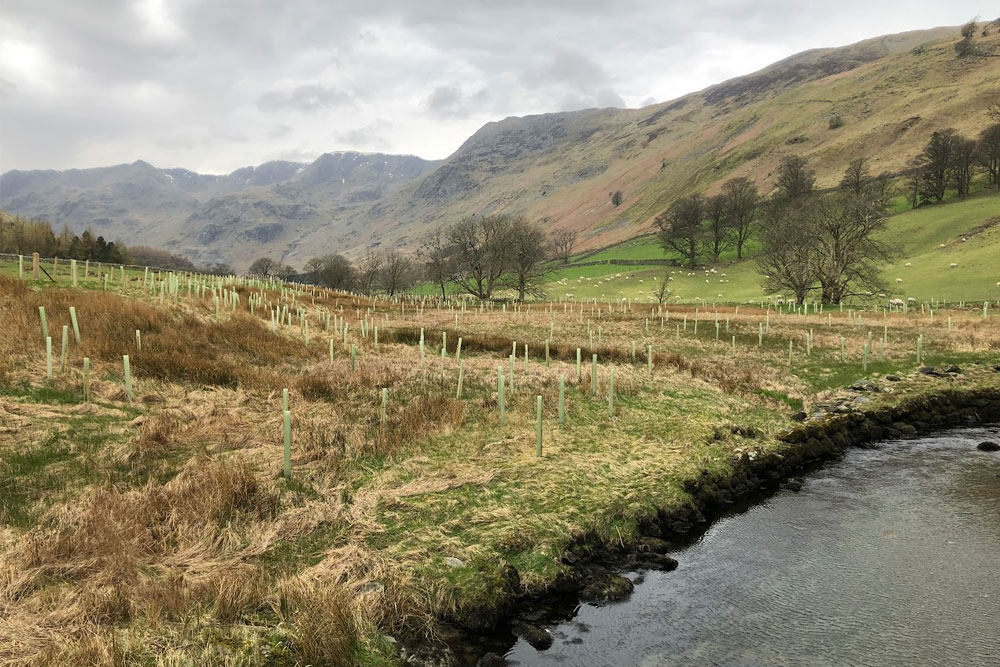 The storm to which Miles is referring is Storm Desmond, one of the most severe weather events ever to strike the north of England. On 5 December 2015, after weeks of rainfall, Storm Desmond tore through the Lakes with devastating force. Glenridding Beck burst its banks, local villages (including Glenridding and Patterdale) were swamped, and the historic bridge crossing at Pooley Bridge was swept away – leaving residents cut off, with the only route in or out involving a 20-mile detour via Penrith. The storm set a new UK record for the most rainfall in 24 hours: 341.4 mm (13.44 in), surpassing the previous record set at Seathwaite in 2009 by nearly an inch.

True to the strong community spirit of the Lake District, locals turned out in force to help with the clean-up, but it was soon clear the recovery was going to run into millions of pounds, and last months – if not years. Big ideas were needed. Bold plans. And what better to get the valley back onto its feet than a brand new walk?

“We needed something to encourage people back to Ullswater, and bring much-needed cash into the valley,” explains Miles. “A new trail seemed the obvious answer. Landowners, the National Trust and the National Park Authority worked together to make it possible, and it’s been gratifying to see what a success it’s become. I don’t think anyone back in December 2015 thought things would turn out as well as they have, but here we are. It’s been wonderful to see.”

The path was opened to the public just five months after the storm, on 25 April 2016. Since then, it’s been recognised by the Long Distance Walkers’ Association, giving it the status of other esteemed long-haul trails like the Coast to Coast, the Dales Way and the Hadrian’s Wall Path. Covering 22 miles, it’s split into four manageable sections, meaning walkers don’t have to tackle it all in one go – although plenty have. Since 2016, it’s thought 60,000 people have completed it.

It’s even grown. New loops have been added along the Eamont River and the nearby estates of Dalemain and Lowther, while integrated bike and bus routes now enable walkers to tackle the trail entirely car-free.

More recently, the Ullswater Way has become the Lake District’s newest outdoor art gallery. Twelve specially commissioned sculptures and installations have been placed along the route, commemorating the valley’s history and culture.

“The idea was suggested by a local farmer called Gordon Lightburn,” says Miles. “We thought it was fantastic, and within a few weeks we’d raised more than £20,000. All we needed then was to find the artists, and thankfully, there are plenty to choose from in the Lake District.”

Each artwork has its own tale to tell about Ullswater’s past. There’s a wooden gate in honour of Dorothy Wordsworth (who, like her brother William, loved wandering round Ullswater). There’s a seat marking an ancient Roman crossroads. There’s a stone monument dedicated to the hardy Herdwick sheep. And, of course, there’s a sitting stone in honour of the godfather of Lakeland walking, Alfred Wainwright, carved by the renowned Cumbrian stoneworker Jimmy Reynolds.

For Miles, however, most poignant of all is the Birkett Memorial – laid in honour of Lord Birkett, who made an impassioned speech in the House of Lords against the Manchester Corporation Waterworks’ controversial plan in the 1960s to build a weir on Ullswater to provide drinking water for the city. The plan was thrown out; Lord Birkett died of a heart attack just two days later.

“It’s incredible to think how close the valley came to sharing the fate of other Lakeland valleys like Mardale and Thirlmere. It’s unthinkable now that such a plan would even get past the drawing board, but ideas around conservation were very different back then. That’s been one of the most positive developments of the last half-century, I think.

“The Lakes are much busier now, of course, but the landscape is also far more protected and valued now than when I was a boy. In its own way, perhaps the Ullswater Way has played a role in that. It’s a pleasant thought to know something you helped create will be part of this landscape for generations to come.”

Explore Another Place’s guide to the Ullswater Way