The Lakes on film

Reflecting on his recent work for Another Place, Michael shares his love of the Lakes, why photographing the blue hour is worth the early alarm, and how Jurassic Park proved an unlikely source of inspiration…

My journey in photography and film began with a love of being outdoors, escaping the rat race of modern life. It’s where I feel happiest and most at home. When I started climbing mountains six years ago, I wanted to document my adventures in a more tangible way, which led me to buying my first camera.

There’s something very special about being on a mountain summit at dawn. It’s incredibly peaceful. In most cases, I’ve just spent the last 90 minutes racing up the mountain in the dark, tired and gasping for breath. But it’s worth it for what comes next: the blue hour followed by sunrise. They’re both equally stunning to witness and how they make a landscape look and feel is a joy to photograph. These fleeting moments are the ones that make everything so rewarding.

I’ve always had a creative mind, but I never had a way to express it until photography came along. It allowed me to form a deeper connection to the outdoors, giving me more reason to head out and to see new places.

“There’s something very special about being on a mountain summit at dawn. It’s incredibly peaceful. In most cases, I’ve just spent the last 90 minutes racing up the mountain in the dark, gasping for breath. But it’s worth it for what comes next: blue hour followed by sunrise.” 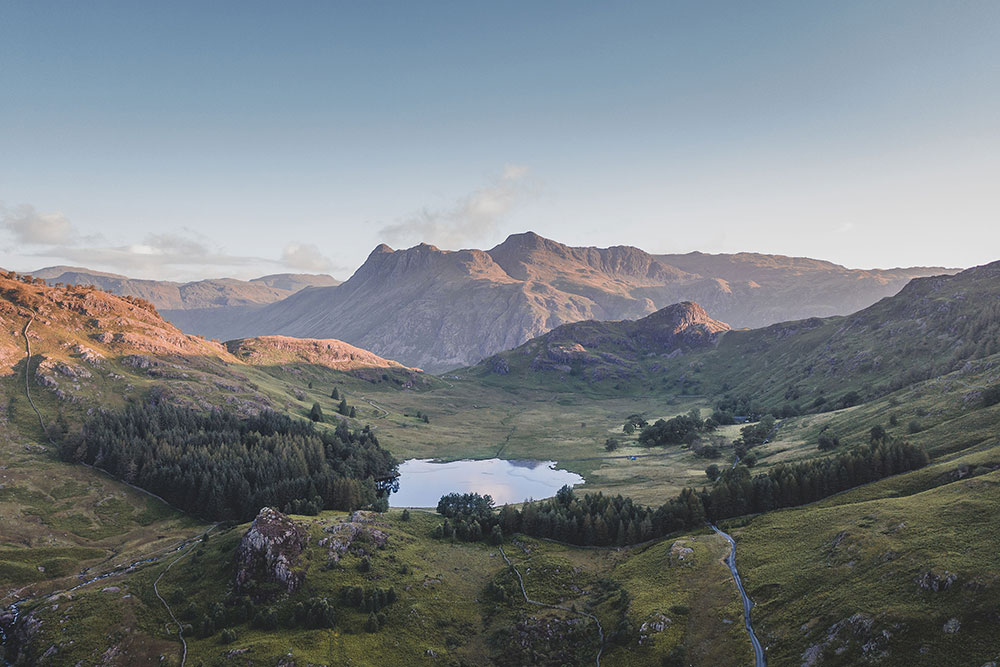 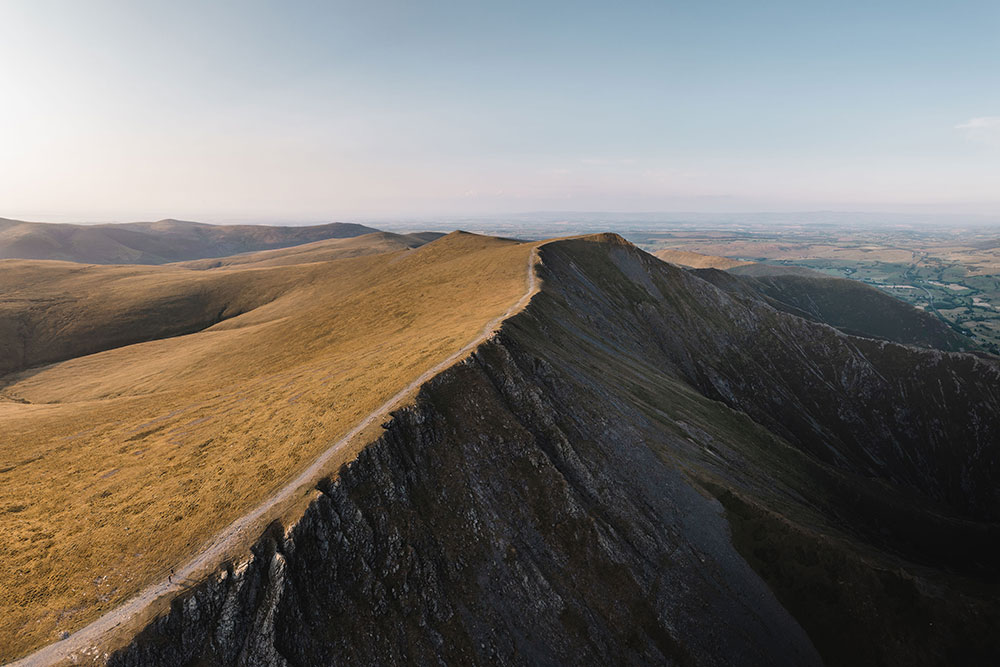 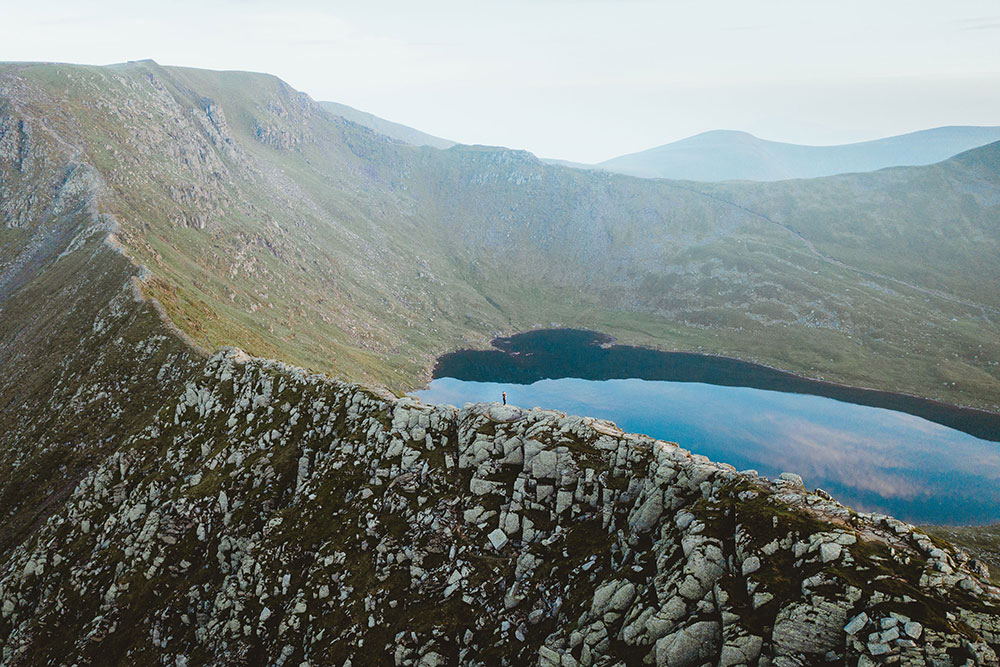 I taught myself photography, picking up tips online and surrounding myself with a group of talented creative friends. I love everything about the process and find it a hugely rewarding career.

Natural landscapes are my muse. The outdoors is an unpredictable environment to shoot, and the changing weather forces you to adapt. I love the challenge this brings; it allows me to think differently about how to capture a location.

I’ve wanted to work with Another Place for a long time, so I was thrilled when the opportunity presented itself. The hotel is a gateway to the outdoors and getting active, so it was important for me to create a body of work that conveyed that and felt immersive. I wanted the films to show how grand the Ullswater setting is, whilst also maintaining an intimate experience for the viewer – making it feel as if they’re part of the swim or paddleboard lessons themselves.

To get the desired effect, I had to use an underwater camera – shooting in, on and under the surface of the lake. That really brought the films to life and complemented the wide drone shots perfectly. We were also blessed with two of the two nicest summer days I’d seen all year, so that was a huge bonus!

“I’m always hunting for cloud inversions, a phenomenon where the summits are warmer than the ground below – creating scenes of thick, cotton candy clouds rolling through the valley.”

I’ve always loved movies, but one that left a real imprint on me is Jurassic Park. I aspire to bring the same sense of awe, wonder and adventure I felt first watching that film into my work. Dinosaurs are also pretty cool, right?!

When I’m shooting in the Lake District, I’m drawn to the dramatic landscapes of the southern fells like Crinkle Crags and Bow Fell. I love the rockier terrain you find up there. My absolute favourite location however is Helvellyn via Striding Edge. It’s an incredibly photogenic mountain and one I come back to time and time again.

I think Ullswater is one of, if not the, best destinations in the Lake District. Its setting makes it a hub for adventure. The lake itself is an ideal space to spend time in and on the water, but unlike others, Ullswater is surrounded by fells that all have their own unique charm and character, like Hallin and Gowbarrow.

The original plan for this shoot was to catch a cloud inversion over Ullswater. Unfortunately, that didn’t come to fruition and we found ourselves looking at perfect reflections of the stars in the lake at 4am. With time running out, we made a hasty hike up Gowbarrow fell – a place I would usually overlook in favour of bigger mountains. A phenomenal blue hour greeted us at the summit, in which I grabbed the first image. I thought it would be good to get the same shot during golden hour, so I returned to create the second image. It demonstrates just how different a landscape can look at certain hours of the day.

I find drone cinematography an incredibly beautiful and immersive way of shooting a landscape. It allows me the freedom to move the camera wherever I need it, without being restricted to what you can see from the ground.

I love capturing the wonder and awe of these beautiful landscapes – making the viewer feel as if they were entering a spectacular cathedral for the first time. For me, drone cinematography is the best format to achieve that sense of grandeur.

One of my favourite images from 2021 has to be a sunset on Blencathra. I was filming with the drone when I noticed a composition on the summit that I’d never seen before. The contrast of the shadows below the ridge with the light on the peak instantly stood out to me.

I’m always hunting for cloud inversions, a phenomenon where the air temperature is inverted and the summits are warmer than the ground below – creating scenes of thick, cotton candy clouds rolling through the valley. They are very hard to catch and require a lot of patience, failed attempts and hours of looking through weather reports, but they are worth it in every way.

“I love capturing the wonder and awe of these beautiful landscapes – making the viewer feel as if they were entering a spectacular cathedral for the first time.”

I’ve become more and more drawn to photographing water recently. There’s something about being in the water that feels like an escape, which I enjoy trying to translate into a photograph. I believe there’s a connection between water and mental wellbeing – it’s a remedy for so many people.

I made my cinematic aerial film, The Lake District, to show just how charming and beautiful the Lake District is – both for those who love it as much as I do and those who’ve never visited. With it being England’s largest national park, it was quite a daunting challenge but one I knew I could achieve if I set my mind to it.

It ended up taking me a full two years to complete the film. The delay was down to the weather, a lockdown (or three), and me being very meticulous about the shots and locations that made it into the final piece. I had to shoot a lot of places more than once to get them right, and living two hours away meant many sleepless nights to catch sunrises and an unthinkable number of miles driven. But it was all worth it. I’m very proud of the finished piece and how it encapsulates this beautiful part of the world.

Watch Michael’s films about stand-up paddleboarding and wild swimming at Another Place.

Take a look at our photographers guide to Ullswater.