If anyone knows what makes the Lake District tick, it’s David Felton. As the producer of the hugely popular Countrystride podcast, created with the artist and presenter Mark Richards, he’s met practically everyone who’s anyone in the Lakes – from local legends like fell runner Joss Naylor to bestselling authors like James Rebanks and Lee Schofield.

He’s also the editor of a series of bestselling walking guides, including the official companion to the Ullswater Way, and the Six Walks Around Ullswater books you’ll find in your room here at Another Place – both published through his company Inspired by Lakeland.

As part of our Art in the Wild series, we caught up with Dave to chat about his innovative podcasting and publishing work, his lifelong love of the Lake District, and his latest book, Forty Farms, which will be released in September 2022.

How did the idea for the guidebooks came about?

I’ve been publishing books about the Lakes for around a decade, covering topics from farming and history to landscape photography. But we didn’t have a walking guide in our portfolio. Then out of the blue, we were asked to publish the official Ullswater Way guide.

I developed the idea alongside local artist and guidebook author Mark Richards, who creates all the incredible linescape drawings that accompany his text. He spent some time walking with and refining his craft with Alfred Wainwright, and he’s become very well known in his own right for his pen-and-ink work, and his Fellranger series of guidebooks.

With our ‘Walking Companions’, we wanted to create guides that were both practical and useful, and which also paid homage to the great tradition of guidebook writing in the Lakes. The Ullswater guide was published just after Storm Desmond back in 2015, and since then, we’ve written another four books in the series, including guides to Threlkeld and Ambleside.

Why did you decide to feature pen-and-ink drawings rather than photography in the books?

Given Mark’s talent and all the people who appreciate his work, it seemed odd not to use it. It’s not like the Lakes isn’t blessed with great photographic guidebooks. We wanted to do something different – a modern guidebook which also taps into the long tradition of Lakeland linescapes.

I also think there’s more love in it. Mark spent hundreds of hours putting these together. The drawings are an expression of his love for Lakeland, and I think people can feel that in the books. Mark is really proud of his tutelage with Wainwright, but he never wanted to be a disciple – he wanted to take his art, and his guides, in their own direction. Hopefully we’ve got that combination right.

How do you go about creating the guides?

Initially, Mark chooses the walks, with input from the local community. He goes out and takes photos along the way which he uses to create his linescapes, and writes his own text to go alongside his pictures. Once he’s done, I walk them again, and then give the text an edit. We also get a panel of local walkers to test them too.

We want the books to be pleasurable to read: I’m a strong believer that if you’re writing about beautiful places, the writing should be beautiful. One of the things I love most about Wainwright’s books is that they’re little works of Romantic literature. He is a superb wordsmith as well as a superb artist. We wanted our guides to be like that too. The idea was that people could enjoy reading them as much in the bath as well as out on the fells.

The idea was that people could enjoy reading them as much in the bath as well as out on the fells.

The style is quite different to many guidebooks. They’re more than just walking guides – they mix in lots of history, heritage and local interest too…

Wainwright concentrated on the fell tops, but we don’t really. We look at the valleys, the lakes, the approaches and the waterfalls, and weave in lots of local interest, history and heritage alongside the walk details.

One of my main bugbears about so many guidebooks is that they feel like threadbare instruction manuals, without any context about what you’re seeing. We talk about local issues around farming, biodiversity and conservation, as well as lots of Lakeland history. If you don’t understand somewhere, you can’t truly love it. We have a responsibility to help people understand the Lake District as a living and working place, not just a tourist destination.

You’re also passionate about giving back to the local community…

We thought it would be great to offer a percentage of the cover price back to the community. So for every copy of the Ullswater guide sold, 50p goes back into the valley – and we’ve contributed to things like repairing stiles, Fix the Fells and the Friends of the Ullswater Way. Local shops get a percentage of the cover price and every year we give away about £5k to local charities. 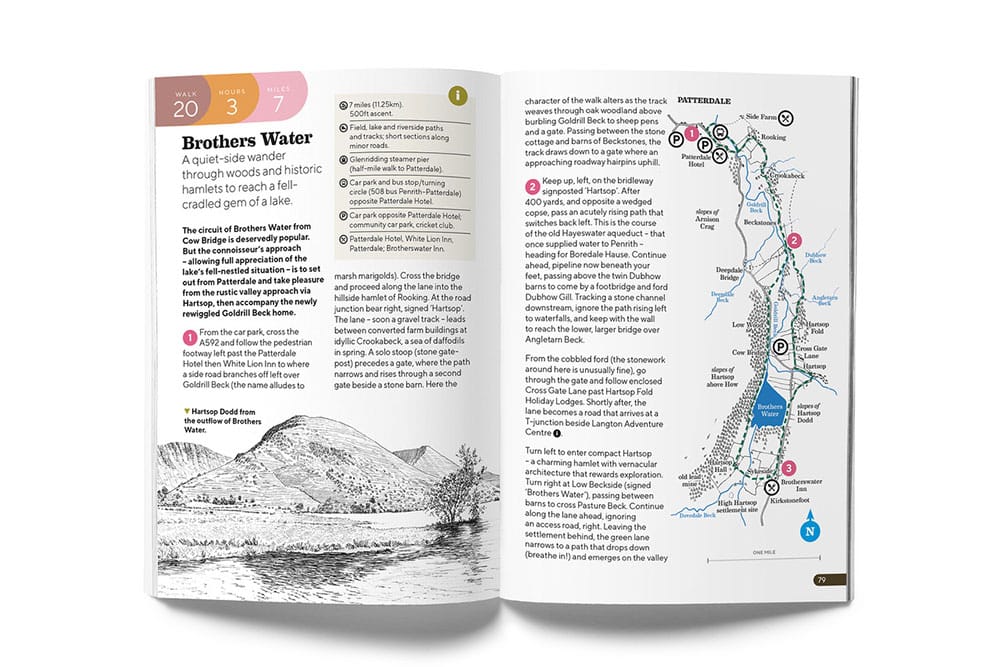 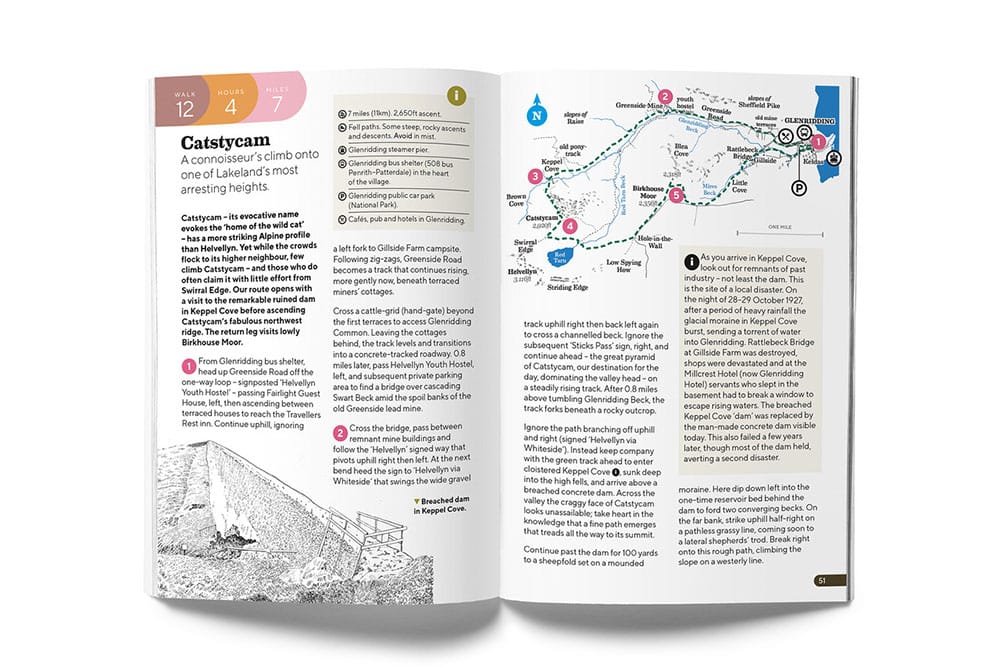 Did you have an aim in mind for the Countrystride podcast when you set out, or is it something that’s evolved over time?

For us it was just a way of learning more about this place we love, and meeting the people who make it what it is – whether that means a Cumbrian farmer reminiscing about his childhood in the 1950s, or a local expert on lead mining or literary history or whatever. It’s lovely to hang out with people who are passionate about their patch of the Lake District and listen to them talk.

If there is a grand aim, I suppose it’s trying to communicate that the Lake District is a living, working landscape, not just a picture-postcard view or a historical place that should be preserved.

There are all kinds of complicated issues about how we manage the landscape at the moment – the way it’s farmed, the loss of biodiversity, the challenges inherent in World Heritage status.

Some of the more active debates quickly become controversial; we wanted to create something that dealt with complex issues in a sensitive, non-judgmental way through the eyes of the people who understand it best. There’s an impetus on all of us to communicate issues in an understandable, accessible way; narratives change minds.

It’s important to hear somebody’s voice… We wanted Countrystride to feel like sharing a fantastic walk with someone passionate and fascinating, and hopefully we manage to achieve that.

Why did you make a podcast, rather writing a book, or a series of articles, or making short films?

I think it’s important to hear the human voice. You lose so much of the tone and nuance of expression if you’re just reading words – or a Tweet. The lovely thing we have with our hour-long format is that we can talk to someone like James Rebanks and really dig down into his life experience and the nuance of his position. We wanted Countrystride to feel like sharing a fantastic walk with someone passionate and fascinating, and hopefully we manage to achieve that.

What does the Lake District landscape mean to you?

It’s where I go to think. Ideas come freeform when I’m out walking, and it helps me deal with problems I can’t crack – professional and personal. I find answers out in nature. I don’t think of myself as an artist, but I do think of myself as a creative person – and a lot of ideas come from walking. It gives me inspiration on a daily basis, just being here, immersing myself in the landscape and interacting with the culture and people.

Tell us about your new book, Forty Farms?

It’s a collection of 40 long-form interviews with farmers in various parts of the Cumbria. Farming has been part of the fabric of life here for thousands of years, but we’re arriving at a point of profound change that will impact on the lives of many, and is likely to significantly change our landscapes.

There’s a tension between the cultural heritage of hill farming – and how it has traditionally been practised – and the stark fact that much of our upland landscape is in a pretty poor state from a biodiversity perspective. You can acknowledge that fact without blaming farmers, who did the economically sensible thing – and fed the nation – by following the headage payments for increasing livestock on the fells.

Increasingly as a society we’re realising there are all these other issues we need to confront: soil loss, erosion, pollution, food security, climate change. Subsidies are changing, fast, and trade deals are undermining the ability of high welfare food producers to feed people on ever-tighter budgets. Many farmers feel their traditional way of life is under attack. The book discusses all of this and more, while also highlighting dozens of stories of ambition and entrepreneurship.

Innovative farmers like James Rebanks and Danny Teasdale in the Ullswater catchment are showing there is room for both food production and nature. You can still farm and raise livestock, but you can also have great big hedgerows and slower, healthier rivers. You can plant new trees alongside becks onto the fells so that trees flourish again there without losing productive grazing land. And you can add ponds and scrapes to make space for insects and waterfowl. Farming and conservation can co-exist with the right support. That’s one of the key strands that emerges from the book.

#81: Cumbrian dialect
Featuring two members of the Cumbrian Dialect Society, this episode was a chat between two old friends talking about some of the fabulous local dialect. It’s also a really interesting insight into how the language has been shaped by different periods of immigration.

#64: Joss Naylor
The fell running legend (and Lakeland royalty!) took us for a walk around Wasdale and spoke about his childhood. He really opened up about enjoying your own company on a long run, about how he used running to work through frustrations, and about his wonderful Lakes, Meres & Waters run. One amazing thing he showed us was an area of fell that he had single-handedly cleared of bracken, about two square miles.

#60: Wad
This episode covered the Borrowdale lead mines, and the story of how German miners transformed the wealth of the whole country. This remote fellside in the Lake District changed the fortunes of Britain and kicked off two centuries of capitalism.

#54: Damsons
A couple of octogenarian gents talking about their memories of damson picking in the Lyth Valley, the history of the ‘Shropshire prune’, and why they think damsons are still important.

#49: Richard Else
Richard was the producer of Wainwright’s TV programmes, and he talks really interestingly about the challenges of getting the great man on film. He wrote the book that first hypothesised that Wainwright was probably on the autistic spectrum. Richard had loads of memories, some emotional, many very funny about working with someone who really wasn’t born to be worked with.

#38: James Rebanks
Based just over the hill from Another Place, James is one of the great visionary thinkers in Lake District, in my opinion. A bestselling author, hill farmer and champion Herdwick breeder, he talks very candidly about finding space for nature on his farm. He is one of the most thoughtful commentators about farming at this time in history in the UK, carrying forward Beatrix Potter’s immense legacy.

Walking in the Lake District

From short family strolls without gates and stiles to full day hikes in the fells, we have a series of walks which we recommend to guests. Some even from our front door.