One of the most spectacular sailing events in the country... The first to be held since the Lake District was declared a UNESCO World Heritage Site, this years 2018 Birkett is taking place on the Saturday 7 and Sunday 8 July at Ullswater Yacht Club. The unique annual race was established in 1963 in memory of Lord Norman Birkett who successfully defended the right of public access to Ullswater which was threatened with reservoir status in the early 1960s. He… 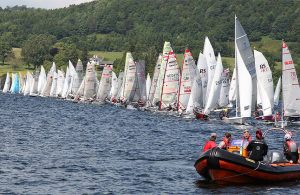 The Lord Birkett Memorial Trophy, now in its 56th year, returns to Ullswater Yacht Club on 6 & 7 July 2017. First a 1963 celebration regatta in honour of Lord Norman Birkett, who passed away two days after successfully preventing Ullswater from becoming a reservoir in the House of Lords, the club has held the round-the-island race each year since. The Birkett is now the biggest event of the year – a festival of sailing attracting racers of all levels from all over the country.